I just wanted to thank all the bloggers and book reviewers who have already agreed to either read FATHOM for review and/or let me write a guest post during the month of October. This is a list of the amazing blogs who will be taking part in the release of my first YA novel, FATHOM.

Blogs on the Tour

Thanks SO much! You all rock!!

However, there's still time to be part of the tour. If you'd like to join, please check out the tour details HERE or leave a comment below with your email address and a link to your blog URL.

Posted by Merrie Destefano at 8:27 AM 4 comments:

And another quote from FATHOM

Another little teaser to wet your appetite. FATHOM releases on October 1. For more information, check out my website HERE. If you're a blogger who'd like to review FATHOM, there's info on the blog tour HERE. 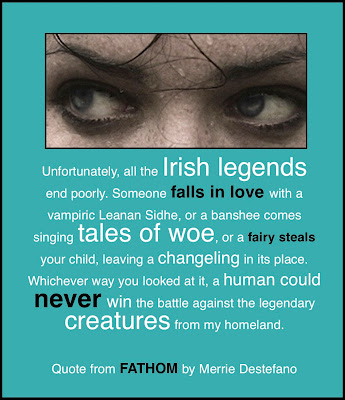 Posted by Merrie Destefano at 5:38 PM No comments:

Just for fun: A quote from FATHOM

This is just something for fun—something that can be shared online. I plan to pin it on my Fathom Pinterest board and thought I'd share it here first. Enjoy! More to come in the weeks preceding Fathom's October 1 launch. 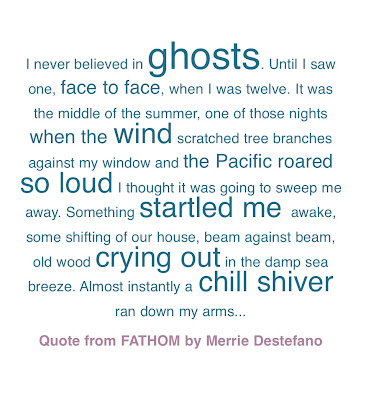 Posted by Merrie Destefano at 11:20 AM No comments:

Cover and first chapter reveal for YA Novel, FATHOM

Sometimes it seems like the time between an author’s books can take soooo long. If you’ve ever wondered what we’re doing in those quiet times—when we don’t actually have a new book on the shelf—the answer is: We're writing another book.

I’ve actually written 2 books since my last novel, FEAST: Harvest of Dreams, was published. Both are YA novels and both are unique, quite different from one another.

The first is a paranormal fantasy and the second is a science fiction apocalyptic story.

I recently decided to indie publish the paranormal fantasy, which is called FATHOM, and those of you visiting my blog will get a taste of the book today. (YAY!!)

This full-length novel will release on Amazon Kindle on October 1. And if any of you are book bloggers who would like to review the book as part of my blog tour, please post a comment with your email address.

So, my big reveal….Here’s the cover: 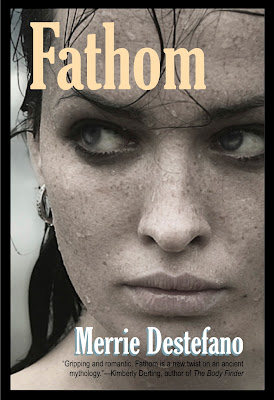 Isn’t she gorgeous? And here’s the synopsis…

Turning sixteen can be hell, especially if everyone in town thinks your mother killed herself and your sister. All Kira Callahan wants to do is swim, hang out with her best friend, Sean, and ignore the kids who torment her at school. That is, until one day when she gets invited to a party. For three minutes her life is wonderful—she even kisses Sean in the driveway. Then somebody spikes her drink at the party and some girls from out of town lure her into the ocean and hold her underwater.

Kira soon discovers that the group of wild teenagers who have come to visit Crescent Moon Bay are not as innocent as they seem. In fact, nothing is as it seems—not the mysterious deaths of her sister and mother, not her heritage, not even her best friend. And everything seems to hinge on the ancient Celtic legends that her mother used to tell her as a child.

And here’s the first chapter…

I never believed in ghosts.

Until I saw one, face to face, when I was twelve.

It was the middle of the summer, one of those nights when the wind scratched tree branches against my window and the Pacific roared so loud I thought it was going to sweep me away. Something startled me awake, some shifting of our house, beam against beam, old wood crying out in the damp sea breeze.

Almost instantly a chill shiver ran down my arms.

I got out of bed, the wooden floor cool and welcome against my bare feet. I paused in the hallway, noticed the fragrance of freshly cut hawthorn in the air. I used to love that smell.

Then I saw something in a pool of moonlight—spots of water on the floor.

Like tiny lakes. Each one perfectly formed and separate.

Leading toward my father’s door.

I couldn’t breathe or move. Part of me wanted to disappear. Another part of me hoped that maybe the past could be erased and rewritten.

That was when I saw her. My mother.

I have her photo on my nightstand—me, my sister and her—all in a huddle of green leaves. Her dark hair twined with Katie’s and my own like the three of us were one person. We were up in our tree house. My father must have taken that picture. And here she was right in front of me, tall and slender and silver in the pale moonlight, her long dark hair swirling in the muggy summer breeze, looking like a mermaid, her skin glistening as if she had just risen from her briny home.

Dark lips parted and a small gasp came out when she saw me.

It only lasted a moment, but in that amount of time I saw too much.

Her fingers stained with fresh blood, her eyes the color of the ocean, her skin so pale it looked as if she hadn’t been in the sun for years.

“Mom,” a whisper cry came from my lips.

She came nearer then, this wraith from the past, until she could press a slender finger against my lips. She shook her head. We both knew the rules. I grew up on the Celtic legends; they were all my family talked about during the long winter nights, when the fire crackled and spit and our bellies were full.

But for now, silence filled the hallway, just long enough for me to hear the air coming in and out of my mother’s mouth, as if she had run a great distance to get here. Perhaps the gates to the Underworld were farther away than I thought. Or perhaps she had climbed the great cliff our house sat upon, all the way up from the ocean floor, to get here. Finally—when neither of us could bear the quiet any longer and I’m sure both of us would have started weeping, when words would have gushed like streams from our mouths and we would have broken every rule that protected the living from the dead—at that point, she brushed past me down the narrow hallway, toward the back door.

I turned and watched her run, across the yard through the thicket of trees and overgrown thorny bushes, toward the cliff. The same path she took seven years ago.

The night she killed my sister and then threw her tiny body in the ocean.

The very same night that my mother killed herself.

I didn’t see the hawthorn branches until the next morning, arcing across every window and lintel that led to the outside. Tiny drops of blood spattered the woodwork, stained the Irish lace curtains. My grandmother cursed beneath her breath as she made breakfast—a sizzle of bacon, the fragrance of burned toast—the Gaelic words draíochta and mallacht dropping like hot stones. My father sat at the table, his eyes downcast and his face the color of a rainy day. But it wasn’t anger in his heart, not like Gram; no, I could tell that sorrow kept his eyes from meeting mine that morning.

I longed to tell him that I had seen her. She’s alive! I wanted to say, but that just wasn’t true. She was haunting us. She had almost spoken to me last night. Almost broke all the rules of heaven and hell and earth, and if we had talked to each other—

I glanced up at Gram, hoping that she couldn’t read my mind—I wondered about that at times.

If my mother and I had talked to each other, well, then I would be damned to a watery grave too. Just like her.

And so on that morning we all sat in the same heavy silence as the evening before. The only sounds, the bright song of the purple finch in the willow tree and Gram’s Gaelic curses.

One strange thing I will always remember about that day.

None of us took any of those hawthorn branches down. Nor did we wipe away any of the blood.

Every year after that, on Midsummer’s Eve, my father put the hawthorn branches up himself. He draped every window and door with rugged greenery, while Gram watched him with her hands on her hips, grumbling. She’d shake her head and tsk, saying he was going to wreck all the trees in the yard with his terrible pruning. And then, when he’d had enough of her complaining, he’d go off in a sulk and spend the evening at the local tavern.

While he was gone, Gram would get out her Irish whiskey.


She’d start by pouring a draft into her cup of coffee, but soon enough, it would be whiskey in her cup and she’d be adding a drop or two of coffee for flavor.

Songs would ring throughout the house, from floor to rafter. And then the stories would come. That was when I would slip out of my room, when the yard was full of green trees and dusky sky and the fairy light of a full moon. I would curl on the sofa with our cat and a book on my lap, pretending to read, but really I was just waiting for the stories to begin.

When my grandmother’s voice rose and fell, her tongue thick from liquor, I imagined that I saw my sister and my mother standing just outside the circle of light cast by our windows onto the lawn. They couldn’t come too close, I knew, not when the hawthorn boughs protected us. I imagined that they danced to Gram’s songs and that they wept at her stories.

Unfortunately, all the Irish legends end poorly. Someone falls in love with a vampiric Leanan Sidhe, or a banshee comes singing tales of woe, or a fairy steals your child, leaving a changeling in its place. Whichever way you looked at it, a human could never win the battle against the legendary creatures from my homeland.

Sometimes, when I curled beneath a blanket and stared out at a star-drenched sky, I wondered if that was why my ancestors left Ireland and came here, this small town on the California coast.

Maybe they all wanted to escape the danger. But it didn’t matter. Because, in the end, dark magic and twisted fate can catch up with you, no matter how far you move away.

So, lovely readers, what do you think? Would any of you like to review this on your blog or write a review for Amazon? Please let me know in the comment section below. And be sure to include your email address!

Posted by Merrie Destefano at 8:58 AM 11 comments: