Sometimes I get caught up in working and writing and editing, and I forget to mention some of the very cool things going on. So here's some stuff, most of it relating to FATHOM, my newest release and my first YA novel.

1. For today and tomorrow only, FATHOM is discounted. You can purchase it on Amazon for 99¢. (YAY!!)

2. I'm currently working on the print version of FATHOM. I have the cover done and I'm almost finished with the interior pages. I'll be sure to let you know when it's finished. You can see the rough version of the cover below. 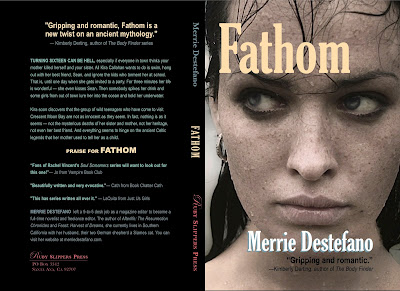 3. I have a number of guest posts and giveaways going on right now. Here are a few:

• I SMELL SHEEP: Author interview and giveaway 3 e-book copies of FATHOM, plus a $25 gift certificate for Amazon.

• BOOKS AND THINGS: Guest post titled, Walking on the Dark Side, where I give 10 reasons why people like to read scary stories. Also, there's a giveaway of 3 e-book copies of FATHOM.

• URBAN FANTASY READER: Guest post titled, Is It Paranormal or Is It Fantasy? There's also a giveaway of 2 e-book copies of FATHOM.

Also, FATHOM is now available for KINDLE, NOOK AND KOBO. As I mentioned above, the print version will be available soon, too.

Thank you so much to everyone who has taken the time to read and review FATHOM!!

Posted by Merrie Destefano at 12:20 PM