Writer Wednesday: Interview with Jane Wells, author of Glitter in the Sun

Today is my second Writer Wednesday, during which I be feature an author you may or may not have heard of. Once again, my goal is to introduce you to some books and authors that you may not have read before. 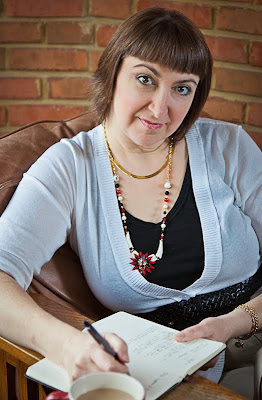 AUTHOR BIO AND BRIEF DESCRIPTION OF HER BOOK:
A wife, mother and writer, Jane Wells has written and taught Bible studies, and served for four years in youth ministry. Currently, however, keeping up with two Golden Retrievers and two very active boys seems to be a full time job on its own. Her book, Glitter in the Sun, will be released November 14 by Read the Spirit/David Crumm Media, LLC. It can be purchased through Amazon.com or through my website, www.glitterinthesun.com. A brief description of the book: Her book explores how readers can glimpse truths of faith through the Twilight saga. Glitter in the Sun invites individual readers and Bible-study groups to consider that there may be links between the love stories of Twilight and the One who can truly satisfy their longing hearts. 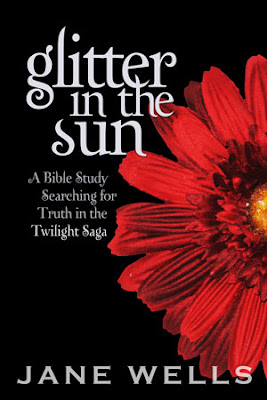 INTERVIEW:
MERRIE: If you could go anywhere on vacation, where would it be?
JANE: Someplace warm and sandy with crystal clear blue water… and almost completely deserted. I don’t know where that is because I haven’t been there yet!
MERRIE: I haven’t been there either, but when you find it, let me know!

MERRIE: What’s your favorite TV show?
JANE: Bones. I am fascinated by the science of it all and love how the characters are written and interact.

MERRIE: What is the one book that everyone should read?
JANE: Oooooh, that’s really hard… other than the Bible – because it doesn’t matter what genre you’re looking for, it’s in there – I don’t have any single recommendation.

MERRIE: What movie or book are you looking forward to this year?
JANE: Breaking Dawn, of course! After that, the upcoming Avengers movie.

MERRIE: If you could have lunch with anyone, living or dead, who would it be and what would you eat?
JANE: There are a bunch of writers I know only through Facebook and their books whom I would love to spend real time with (ahem, Merrie Destefano). Even if we weren’t talking about writing the conversation would still be fascinating because writers are information omnivores. As for what I would eat? As long as there was coffee and cheesecake I would be content!
MERRIE: Coffee and cheesecake? I am SO there. Seriously, it would be so much fun to hang out with you for lunch. We must do that someday.

MERRIE: What is your favorite place to write?
JANE: There is a coffee shop here in Monroe, MI called Agua Dulce. It is my office away from home! When I hit a writer’s block I sit back for a few minutes to sip the bottomless coffee and watch people.

MERRIE: Tell us about your current book.
JANE: Glitter in the Sun is a Bible study that explores just why the Twilight Saga has become such a phenomenon. Even if you don’t care for the story, writing or concept, you’ve got to admit that holding all top four positions of the New York Times bestseller list and grossing more than $1.8 billion (yes, with a “b”) with the first three movies alone, makes the Twilight Saga a force to be considered at least.

I believe the Twilight Saga is so popular because it strikes at a universal chord. The themes of eternal love and unconditional acceptance are at the core needs of every person. We are born that way, to be hungry for the love of an eternally and unconditionally loving God.

MERRIE: How long did it take you to write your current book?
JANE: I wrote Glitter in the Sun one week per chapter, so it took about four months.

MERRIE: What was the hardest part about writing this book?
JANE: Making sure that what I thought was in fact what the Bible said about the topic. It was a huge growth experience for me to seek out what God has to say about all these “modern” questions and problems.

MERRIE: What advice would you give to a beginning writer?
JANE: Just do it. If within yourself you deeply wish you were a writer, then I’d say you probably already are. You just need to put fingers to keyboard and hammer it out!

And now, answer the first thing that comes to your mind:

MERRIE: High heels or tennis shoes?
JANE: Ummmmm… well… will I be playing with my boys or playing at being a grown-up?
MERRIE: Trick question. And…a trick answer. How about tennis shoes with high heels?

MERRIE: Rich or famous?
JANE: Famous. (My husband would say rich. That’s why we’re a team!)

MERRIE: The beach or the forest?
JANE: Can the beach be at the edge of the forest?
MERRIE: Cheating. Ahem, I mean, you stole my answer.


Thank you, Jane, for stopping by today and I wish you much success with Glitter in the Sun!
Posted by Merrie Destefano at 8:00 AM