Meet the Characters from FATHOM + a Contest

Before I start this week's character introduction, I'd like to share snippets of FATHOM reviews from GOODREADS:

"Wow! Every book Merrie Destefano writes is even better than the last. I loved the books she wrote before, but Fathom is unquestionably my favorite of her stories. The characters, plot, and world are all well-developed and they sucked me right in. I spent almost an entire day immersed in Fathom, and I didn't want to leave when it ended."—Becca

"Nothing is at it seems. There are surprises and twists everywhere. This book fits right in with Merrie Destefano's past books that tend to swim in their own lane. She has a great imagination and does a wonderful job with imagery and characterization."—Cheryl

And now, for the CHARACTER OF THE WEEK...

Today you'll meet one of the mysterious teenagers that comes to Crescent Moon Bay during tourist season—Caleb. 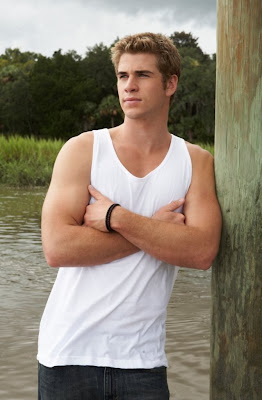 • Name: CALEB
• Lives in Duncarrig
• Not attending high school
• Favorite class: Not really a class, but enjoys studying other cultures and people
• Best friend: Ethan
• Hobbies: Swimming, hunting,
• Favorite bands: Celtic music
• Favorite drink: Water
• Social standing: A quiet leader in his circle of friends
• Greatest joy: Listening to legends
• Biggest nightmare: That he will have to go to war before fulfilling his dreams

Here's a snippet of text from when Kira first sees Caleb:

This guy was gorgeous and then some. Light brown hair streaked with blonde, skin paler than you’d expect for someone as athletic as he obviously was. I couldn’t tell what color his eyes were, but I had a feeling they were green or blue. Like mine.

My heartbeat sped up when he stared at the window display. Then he did something unusual—he lifted his gaze, as if he was trying to see through to the inside of the store. He looked around, first at the racks of postcards, then at the display of starfish and shells, then at the ceramic mugs painted with our store logo, until at last, he spotted me at the counter. Our eyes locked and his lips curved in a swoon-worthy grin.
.............. 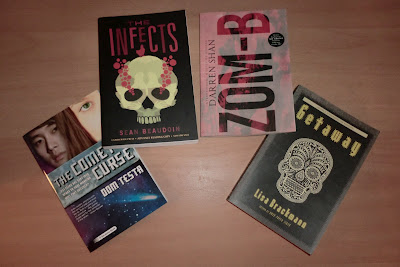 Here they are:
THE COMET'S CURSE by Dom Testa
THE INFECTS by Sean Beaudoin
ZOM-B by Darren Shan
GETAWAY by List Brackmann

Contest ends midnight on Sunday, September 23, and I'll announce the winner next Monday.

Posted by Merrie Destefano at 8:54 AM