Meet the characters from FATHOM

Every Monday for the next 4 weeks, I'll be introducing you to one of the characters from FATHOM. Plus, I'll have a giveaway.

First up, the main character of the book: Kira. 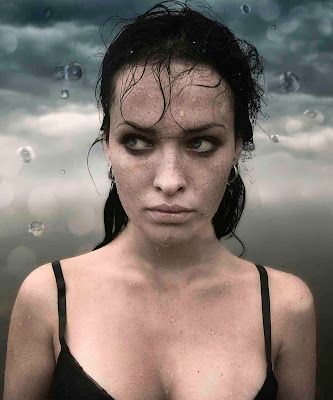 Played by an unknown breakout actress.

• Name: KIRA CALLAHAN
• Lives in a bungalow atop a cliff in Crescent Moon Bay
• Age: 16
• Sophomore at Crescent Moon High School
• Favorite class: English
• Best friend: Sean
• Second best friend: Brianna
• Hobbies: Swimming and writing down secrets in her journal
• Favorite bands: Kings of Leon, Paramore, Snow Patrol and The Killers
• Favorite drink: Coke
• Social standing: Never been kissed, never been asked to a party, never been popular
• Greatest joy: The ocean
• Biggest nightmare: That she will one day join her dead mother and sister by drowning in the Pacific

Here's a snippet of text from Kira's POV:

Gray skies gave way to blue, seagulls circled overhead, and almost everyone else in California was still asleep. But I was racing as if my life depended on it. The rest of the world faded away, from the seals that waited back on shore to the homework I hadn’t finished. Sand spun beneath my feet as I ran across the beach, waves curling and snapping as I approached. Hands over my head, I dove into the water.

He was just a step behind me, I could feel it.

CONTEST IS CLOSED AND THE WINNER IS ANOTHER NOVEL READ!! Congrats!

I'm giving away an ARC of Scarlet by Marissa Meyer. This is just the type of book Kira would read, since she loves fairy tales and legends.

Here's a synopsis of Scarlet:

Cinder, the cyborg mechanic, returns in the second thrilling installment of the bestselling Lunar Chronicles. She's trying to break out of prison--even though if she succeeds, she'll be the Commonwealth's most wanted fugitive.

Halfway around the world, Scarlet Benoit's grandmother is missing. It turns out there are many things Scarlet doesn't know about her grandmother or the grave danger she has lived in her whole life. When Scarlet encounters Wolf, a street fighter who may have information as to her grandmother's whereabouts, she is loath to trust this stranger, but is inexplicably drawn to him, and he to her. As Scarlet and Wolf unravel one mystery, they encounter another when they meet Cinder. Now, all of them must stay one step ahead of the vicious Lunar Queen Levana, who will do anything for the handsome Prince Kai to become her husband, her king, her prisoner.

Posted by Merrie Destefano at 10:00 AM