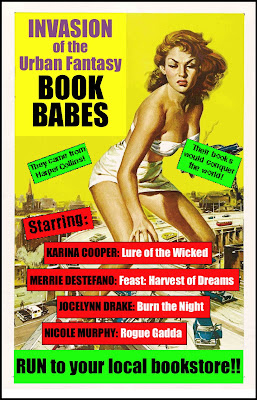 Today, for the second installment of the Invasion of the Urban Fantasy BOOK BABES, I'm going to be sharing all of FEAST's delicious news and reviews, a contest and a scrumptious excerpt. You can also read other excerpts of FEAST on my fellow BOOK BABES' blogs here: Karina Cooper, Jocelynn Drake and Nicole Murphy.

So now, let's GET THIS PARTY STARTED!!!

First up, there have already been a number of cool reviews for FEAST here:

BITTEN BY BOOKS:
"Feast was like a dark fairy tale come to life, full of monsters and heroes and things that go bump in the night that feed on your dreams. Part Urban Fantasy, part Horror, I fell in love with this world."

I SMELL SHEEP:
"This isn’t a traditional Urban Fantasy or Paranormal Romance. It is a dark Fairy Tale, a Fantasy. A story of dreams and nightmares, where the spoken word has a power of its own. Her descriptive prose builds a magical atmosphere."

And there are some guest posts and interviews here:

There's a guest post and contest over at Book Faery, where I confess why I the bad guys. You should check it out!

I have an interview over at I Smell Sheep where I discuss how long it took me to write FEAST. And there's a contest running over there.

There's also a guest post and contest at Bitten By Books where I discuss the world-building and creation of the Darklings in FEAST. 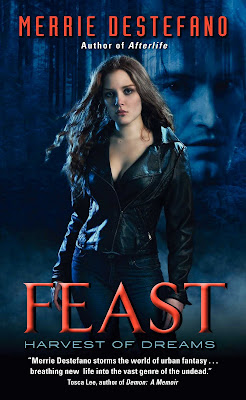 AND NOW, HERE'S AN EXCERPT FROM THE FIRST CHAPTER OF FEAST:


She was just a girl—bony, pale-skinned and wild—when we stumbled upon each other in the woods, the wind shimmering through the trees around us. I remember thinking that she was nothing like her parents, both of them sleeping back in their rented cabin, the stench of rum and coke seeping out the windows and doors.

She should have been scared when she saw me, appearing suddenly in the russet shadows, but I could tell that she wasn't. Her long dark hair hung in a tangle, almost hiding her face. In that moment, I realized that she lived in a world of her own.

“Do you work at the inn?” she asked, her gaze running over my form curiously.

I nodded. Somehow she had recognized me. True enough, we’d seen other often. I did work at the inn. I brought her parents fresh linens and coffee every morning. But this was my free time and I no longer wore human skin.

I frowned, unsure what she meant. I cocked my head and then followed her pointing finger with my gaze. She gestured toward a trail that led deep into the woods, all the way to the edge of my territory.

“Have you gone that way?” I asked, concerned when I saw her yawn.

She nodded and stretched, all of her barely as tall as my chest.

I heard him then, one of my wild cousins, calling to her. She lifted her head and listened.

“He wants me to come back.” She shifted away from me, started to head down a path that led to shadows and darkness.

In that instant, a stray beam of sunlight sliced through the trees, fell upon her milky skin and set it aglow, almost like fire.

That was when I saw them.

She was surrounded by imaginary playmates. Transparent as ghosts, though they were only visible occasionally. An arm here, a leg there, a laugh that echoed and followed after her.

I quickly glanced at her forearms, bare for midsummer and they bore no mark. No one had claimed her yet. She was still free.

I could have claimed her for myself right then and to this day I sometimes wonder why I didn't. I think it was because she was so small—only seven years old, much too young to harvest, though my wild cousin wouldn’t think so.

Here's a LINK where you can read an even longer excerpt on the HarperCollins website.

ON TOP OF THAT, HERE'S A CONTEST: 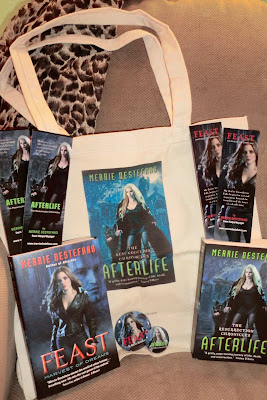 To enter the contest, all you have to do it post a comment below and tell me what's the best book you've read this year. Be sure to include your e-mail address so I can contact the winner. This contest will run through July 13. Prizes include: Afterlife totebag, copy of FEAST, copy of AFTERLIFE, buttons and bookmarks.

I look forward to reading your comments!
Posted by Merrie Destefano at 9:22 AM