Release Day: Excerpt from BURN THE NIGHT by Jocelynn Drake

Yowsa. We're now on Day Three of the Invasion of the Urban Fantasy BOOK BABES. Guess who's up today? None other than the incredibly talented, New York Times best-selling author, Jocelynn Drake. (Hurrah!)

Today you're getting a real literary treat. You get to read an excerpt from Jocelynn's new release, BURN THE NIGHT. 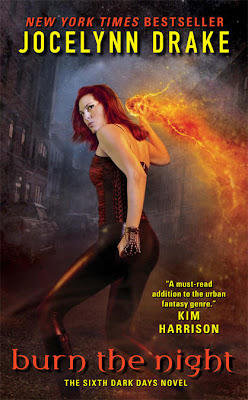 The Great Awakening approaches . . .
After eons in exile, the naturi have broken their chains and now roam the Earth bent on revenge. It is the sworn duty of Mira, the Fire Starter, to protect the nightwalker race—though even she may be powerless to withstand the horrific onslaught. As Mira and her brave lover, the vampire slayer Danaus, stand ready to do battle, thousands of winged shapeshifters darken the skies. The war of ultimate extermination has begun, and the battleground is Mira's home turf.

The humans don't yet recognize the doom descending upon them. And the nightwalkers will surely perish unless they unite with outcast naturi who claim to want peace. But these unexpected "allies" are the same demons who have long worked for Mira's destruction—and in these darkest of days the lines between friend and foe will blur treacherously before the bloody end of all things.

YOU CAN READ AN EXTENDED EXCERPT HERE.

Please note: The reading order of Jocelynn's books is as follows:
Nightwalker
Dayhunter
Dawnbreaker
Pray for Dawn
Wait for Dusk
Burn the Night

YOU CAN PURCHASE BURN THE NIGHT HERE.

And now here's what you've been waiting for


The clang of clashing swords echoed through the woods.

Gritting my teeth, I dodged one blow and swung my short sword at her throat, aiming to remove her head. Rain pelted us in large, heavy drops, blurring vision and soaking clothes. I had called down the rain, but was holding back on the lightning, knowing I would finally need it when they tried to overwhelm me. The torrential downpour I had created wasn’t succeeding in slowing down my opponents as much as I had hoped. Only the one light clan naturi seemed bothered by the weather, while the other four earth clan members stalked me like a pack of wolves looking for a weakness in their prey.

As I fought my one-time brethren, I could easily hear Cynnia’s voice ringing in my head when I would most like to walk away from this battle and return to her side.

Please, Nyx, I need him.

The moment Cynnia spoke those words I knew that I was in trouble. Rowe had become a nightmarish creature among our kind, the first in all of memory to ever be banished. Yet, I also understood my young sister’s thinking. Rowe was a powerful naturi, a force to be reckoned with. He would make a powerful ally if we could win him over onto our side, which was looking thin and sickly in comparison to those that had gathered to Aurora’s skirts.

After traveling for more than a month, word finally leaked into my camp that a group of earth naturi had gotten their hands on Rowe and were dragging him toward Aurora’s domain in the western part of the United States. I could only guess that their plan was to throw a weakened Rowe at Aurora’s feet so that she could deliver his death rather than allow his continued banishment. He was too much of a threat to leave alive.

Sparing a glance out of the corner of my eye, I found that Rowe still lay on his side not far from the fire they had tried to start before my arrival. His arms were bound behind his back and his clothes appeared to be torn and muddy. Whatever their grand scheme was, Rowe was not going to see his wife-queen willingly. He was being dragged before her.

When I had gotten within feet of the camp, they had not hesitated to attack, while the light clan member hung back and vainly attempted to maintain the fire they had been building. Blocks blows and sliding out of harm’s way with a practiced ease, I managed to edge closer to the camp while avoiding my opponents.

“I’ve come for Rowe,” I announced, not looking at my fallen compatriot. “I have need of him. Please, hand him over.”

“Aurora desires his presence as well,” the light clan member smirked as the others circled me. It was the smirk that caused me to recall that this was Claudia, one of Aurora’s long-time assistants and loyal followers. Now, she was reduced to errand runner as there were too few that Aurora felt she could trust. Paranoia and mistrust had sunk its fangs deep into the queen over the past several years.

My grip tightened on my sword, but my gaze never wavered from Claudia. “What does she want with him? He’s been banished.”

I could feel a gathering of energy beneath my feet. One of the earth naturi had moved closer. Someone was about to make their move and I needed to be ready. However, I preferred to know what Aurora was up to before I started killing at my adversaries.

“She’s willing to forgive him if he can hand her the Fire Starter.”

“I doubt that.” Forgiveness was not something that my sister understood or even believed in. While I wasn’t too fond of Rowe, I was willing to let him live if he assisted Cynnia in her endeavors.

“Hand him over to me and no one will get hurt,” I commanded. The muscles throughout my body tensed as I readied for the attack.

“You’re just one pathetic warrior without a nation to protect. We outnumber you now, Nyx, and Our Queen has ordered your death. It’s you who should run,” Claudia mocked.

Pressing my lips into a firm line, I swung my left hand grabbed the small crossbow at my side. As my arm swung up, the bolt shot from the weapon and embedded itself deep within Claudia’s throat, causing her to stumble backward, gasping in horror and pain. She was the obvious leader of the group and now she would be unable to shout orders while I decimated her comrades. The crossbow was hooked back on a strap on my side before she finally hit the ground.

My sword whipped through the air, slicing one earth naturi across the chest. It was little more than a flesh wound, but the blood saturating his shirt was enough to give anyone second thoughts about continuing. Another earth naturi with more common sense and clarity awoke the trees around us. A large limb reached down to grab me, but I ducked out of the way, sliding in the mud and leaves. I grabbed a sleeping branch and swung up so that I was looking down on the little camp. Darkness had thickened in the area, giving me an edge. I had spent too many centuries working exclusively at night, making my night vision sharper, keener than that of my brethren.

Awesome stuff, right? If you want to know more about Jocelynn and all her great books (and I KNOW you do), check out her AUTHOR WEBSITE HERE.
Posted by Merrie Destefano at 8:00 AM