Visiting the town that became Ticonderoga Falls in Feast

One of the best parts about writing is getting to do research--especially when that research involves taking a trip up into the mountains and staying in a cabin. My next novel, Feast, (which releases in just 18 days--yikes!) is set in the San Gabriel Mountains of Southern California. Although the actual town where the story takes place, Ticonderoga Falls, is fictional, it was based on the very real and very charming town of Big Bear, California.

So, at the beginning of December, 2009, my husband, our two German shepherds, our Siamese cat and I spent four days in Big Bear. My husband and the dogs got to go sledding and hiking, while I did research. No, really, I got to go sledding and hiking too. But I really did a considerable amount of research while I was there. We even stayed in a little cabin, similar to the one the main character in Feast, Maddie MacFadden, stays in.

I must confess, I never saw any Darklings though. But they may have been hiding. After all, I was just about to expose them all to the world.

So, here is my photo travelogue of the trip, with captions so you don't feel lost...

The gorgeous drive up into the local mountains...the higher you go, the taller the trees, until finally it seems like the forests could just eat you alive. The perfect setting for my scary, yet romantic novel: 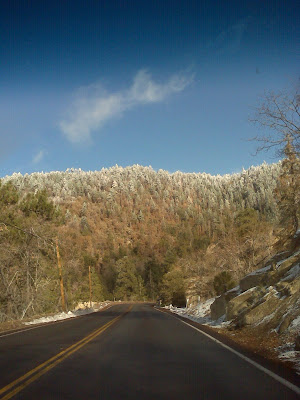 Caleb, the larger than life dog...we finally arrived in the cabin, started to get our things unpacked and, of course, the dog took that time to choose the most comfortable chair for himself. He just watched while we worked: 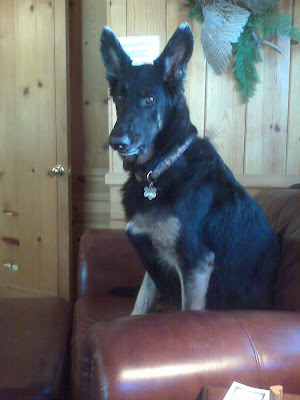 Hezzie relaxed, glad the evil car ride was finally over...he stretched out on an ottoman and waited for us to start a fire in the fireplace. Sometimes he enjoyed being in the cabin, sometimes he acted like we were torturing him. Poor kitty: 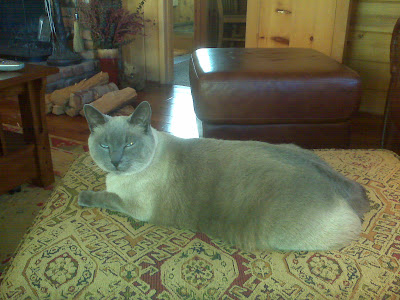 Chatting with someone who lived in Big Bear...this was my favorite part of the trip, meeting the amazing people who lived here. This incredible woman, Cathy Jones, took the time to share stories about the town, pointed out local hiking spots on the map, gave me advice on who to interview and how to get hold of them. She even told me about a local independent bookstore that might be interested in carrying Feast. She gets 5 gold stars for being hospitable and for making the trip much more fun: 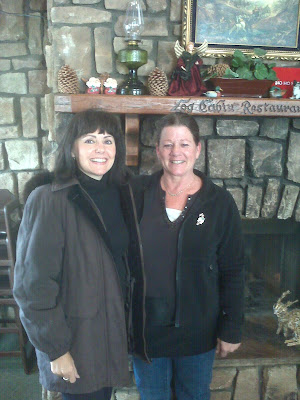 Investigating the SUVs the policemen drove...part of my research involved asking the local police a zillion questions (there's a bit of a mystery in this book) and checking out their SUVs. Since one of my characters was the local sheriff, I needed to know what kind of car he would drive, what his uniform would look like, how he would handle a certain situation (can't give away too many clues!), and what kind of gun he would carry: 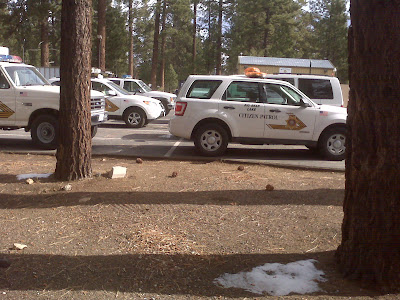 Big Bear Lake, surrounded by snow and shrouded by clouds...isn't this picture a bit eerie? Well, that's exactly what I was hoping for when I picked this tourist town--I wanted something close enough to L.A. to visit within a day and remote enough to be slightly creepy: 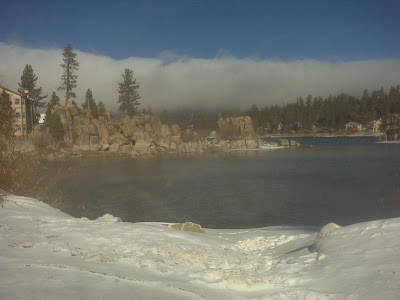 The dogs and I...okay, here's where worlds collide and everything gets really strange. I was up in Big Bear working on the research for my second novel, but at the same time my editor and the staff at Harper Voyager were hard at work getting my first novel ready for printing. So, here I am, frolicking in the snow with my two wild German shepherds. For some reason, Caleb--the one with mouth open--wouldn't stop barking when we were taking his picture. Call of the wild or something. Anyway, that's the only picture I have of him, in eight years, where he's doing anything like that. 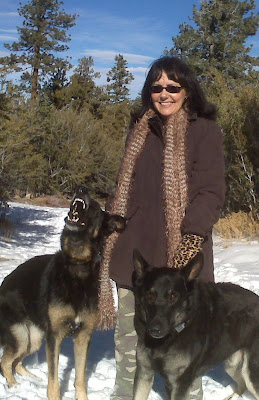 So, then we go home and the next day, my editor sends me the gorgeous cover artwork for Afterlife. Do you see how much my dog looks like the dog on the cover? I couldn't believe it. And not like I look anything like that cover model, but it's weird that we're standing in almost the same position. Worlds were colliding and aliens were dying when all this was going on, that's all I've got to say: 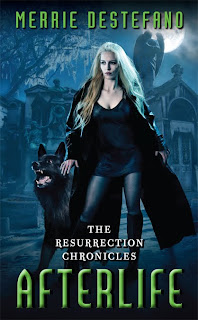 So, there you have it. A tiny glimpse into the real town behind the fictional town of Ticonderoga Falls. And very soon you'll be able to read more about the inhabitants of this mountain village, both human and Darkling.
Posted by Merrie Destefano at 7:00 AM