Release Day: Excerpt from Lure of the Wicked by Karina Cooper

Here you go--the first installment of the Invasion of the Urban Fantasy BOOK BABES. Featured author of the day is none other than the fabulous, Karina Cooper. (Wild crowd noise and applause in background.)

Up today, for your reading enjoyment, is an excerpt from her brand new release, LURE OF THE WICKED.

PURCHASE LURE OF THE WICKED HERE.

READ AN EVEN LONGER EXCERPT HERE. (Be prepared to fall in love with this story and NEED to buy it right away.) 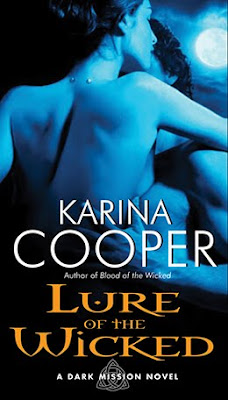 God take them all, he hated this sacrilegious tomb and its aberrant clientele.

But he couldn't do anything about it yet. Patience. It was the stake-out to end all stake-outs. He could do patience.

He had to. He'd had the perfect vantage point, the perfect box seat to watch the opera unfold, but no.

The missionary had to ruin it.

That should have driven him insane. It should have worried him. Instead, he'd barely escaped her sharp eye and quick mind, and even now he smiled from the cramped hole he hid in.

Naomi West would make it fun. Much more fun than he'd thought when he'd first taken on this operation. It wasn't her fault she'd stuck her foot in it, after all. Like him, she was just doing her job.

The Church had dealt its hand. Joe wondered if it knew that it was playing itself at the table.

He imagined that his fellow missionary was well and truly pissed at losing him. It'd been damned close. Only the vase he'd thrown at her had given him the time to get away, but she was tough stuff. Mission-suit Teflon.

And if she ever got her hands on him... He didn't laugh, but it was close. Swallowing back a bubble of eagerness, he didn't so much as shift a muscle. Strain already ripped through his cramping limbs, but he could hold it until the Second Coming if he had to. Tenacity. That's what made him a damn good missionary.

And based on what he knew about Naomi West, that's what made her almost as good as he was.

Phew. Was that amazing or what? Don't forget, you can read a longer excerpt of this book HERE.
Posted by Merrie Destefano at 9:11 AM